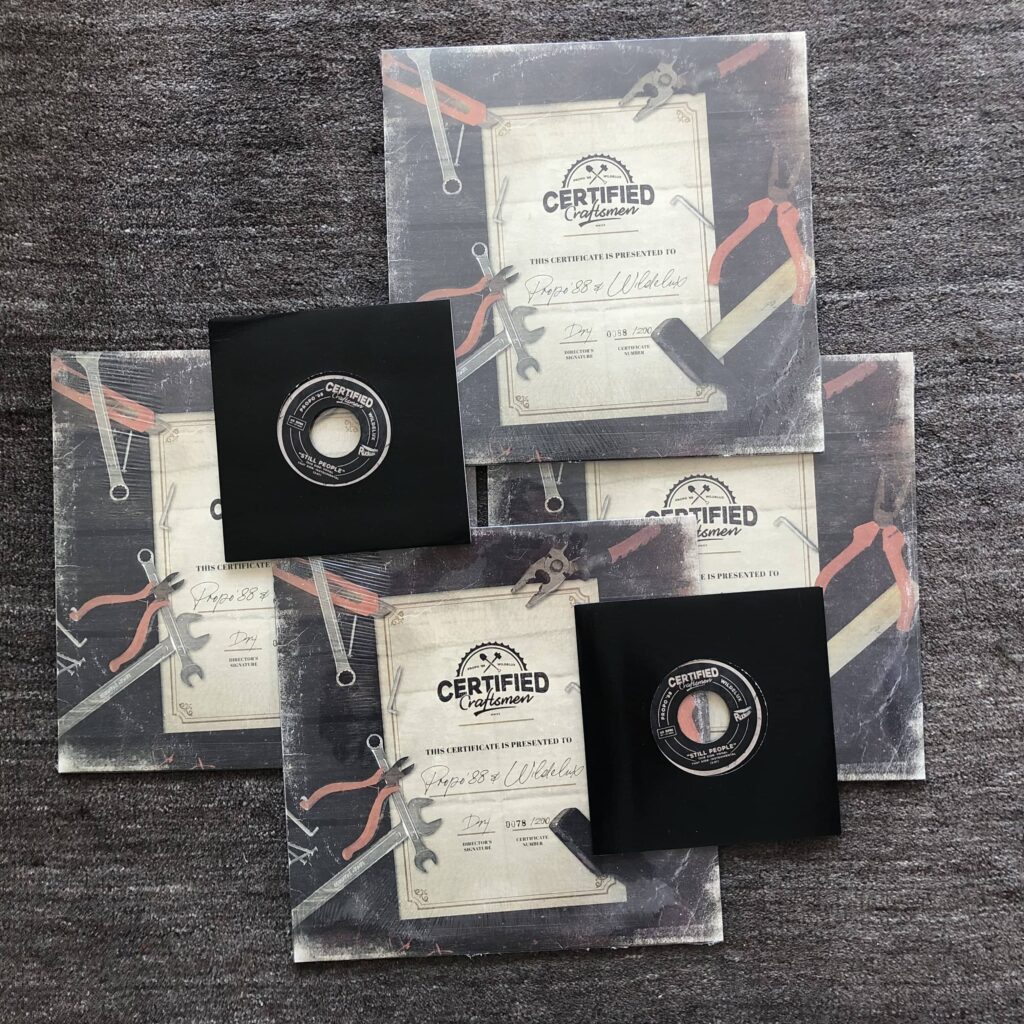 Joost a.k.a. Propo’88 is active in the international Hip-Hop scene since 2011, when he and BlabberMouf started promoting their project “From The Top Of The Stack”. Member of “Da Shogunz” crew, Propo’88 engineered and (co-)produced most of the music Da Shogunz made, and he was the crew’s steady tour DJ. In 2017 he released his first producer-album “Astronomic Delight”, featuring various MCs. His latest release is Certified Craftsmen, a project exclusively produced by Propo’88 and featuring the New York City native MC Wildelux on the vocals. The album is released by Rucksack Records from the Netherlands.

“Certified Craftsmen came together in a cool way, and the process of making the album marks my time in Thessaloniki, Greece (2016-2020). When I was working on the Astronomic Delight album between 2014 and 2016, I was looking for MCs to work with, as the album was going to feature various artists. I had a few usual suspects, but I needed that extra featuring that would make the difference that I was looking for. At the time I was in touch a lot with fellow Ηip-Ηop-producer Kid Tsunami. Tsu was working on an album with Wildelux (of whom I had not heard before at that point), but I was positively surprised when I heard his music. I agreed on doing the cuts for their project, and so I was introduced to Wildelux. I asked him if he would be open to talk about a song for my producer-album as well, and after I sent him some of my work from the past, he agreed to work with me. I sent him one beat, and he took it right away. Two days later he sent me the complete track back in well recorded stems. Never had anyone worked with me that fast and effortlessly, plus his work on the track impressed me a lot. It became the only video single of Astronomic Delight, which we shot with Ntan of Het Verzet in Amsterdam in 2016 (Propo’88 – The Anticipated (Ft. Wildelux) 2017).” 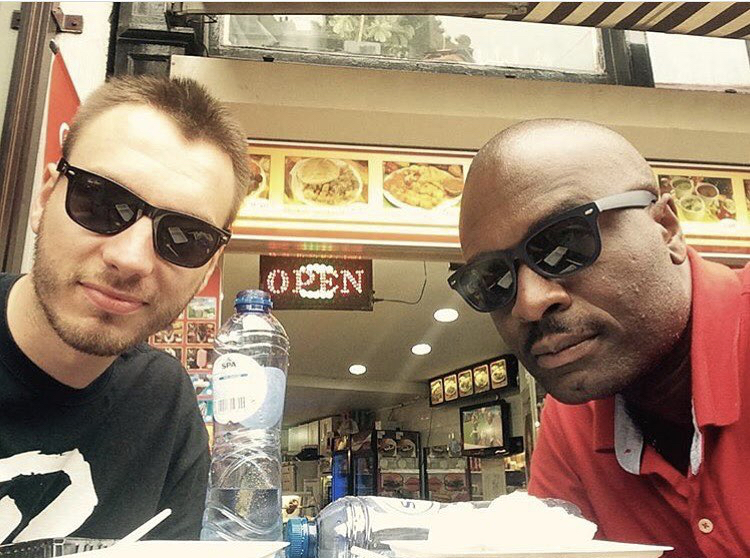 “Around a year later, after the release and positive feedback from the crowd, Wildelux hit me up one day and suggested to make an album together. I had no plans yet for a next project, but as always just after releasing an album, the fire was burning in me to keep up the pace and get to work right away for a new release. We started a routine of having weekly Skype sessions, as I was living in Greece at the time and he is based in Japan. I rented an apartment in Thessaloniki, just outside of the city center by the sea. It was usually very hot and humid, on the weekends I had DJ-gigs downtown and during the weekdays I would make beats on my Akai MPC 2000XL in my homestudio. In between our Skype sessions I would send him selections of usually four to six beats, from which he would pick some and record tracks to. We would discuss our latest recordings during our Skype sessions, recently selected beats and life in general.”

“As I think back, the first beats that I sent him that we recorded tracks to were “Monkey See, Monkey Do”, “Before My Eyes”, “Adapted”, and “Support“. Support at first had a different beat, but after making more tracks for the album, I had my doubts about the production. I flipped the beat around using a different sample, only keeping the drums, and adding extra scratches. It brought new life to the album as it was, which was a fresh breath of air as we had not progressed on the album for a minute. This happened quite recently, in 2019.

There was another song that Will wanted to record again as he felt he could give better delivery to the vocals, but he turned out writing a whole new song with new lyrics. Now the production felt outdated for me, it would make more sense to just make a new beat for it as well then. So, I did, and now we had a completely new track which was totally unplanned. This song is called “Still People” and Mind The Wax had it pressed on a 45. What to do with the old song that basically conceived “Still People”? It beats me at the moment, but perhaps in the near future I will have an answer. Also, one of the earlier songs we recorded was “Fire In The Hole”, this must have been somewhere in 2018. We had the demo for quite a while before I made it a proper song arrangement, and I felt it was not complete, as the song is very vocal-heavy (three verses and vocal hooks).”

“I had built quite good contact with DJ Robert Smith, a well-established and talented turntablist from Berlin. I asked him if he wanted to spice up the track with scratches, and soon he sent me the cuts you will hear on the track after the second verse. As DJ Robert Smith tends to do, he ripped the bridge of the song to shreds with his energetic wildstyle (yet funky) style of phrase-scratching. Now “Fire In The Hole” was ready. For the song “Adapted” I had the same issue, we had great combination of beats and lyrics, but the song needed that extra stamp on it. For some reason the vibe of the track made me wanna have a dancehall/ragga style vocalist on the hook, and I felt inspired by the song “Every Other Day” by Masta Ace, which also features a dancehall/ragga vocalist.

However, I did not know anyone that could do the trick for me, plus I felt it might come out a bit forced after a while. Then it hit me, I needed my long time Hip-Hop acquaintance Malev Da Shinobi, who is a Hip-Hop-singer from Salt Lake City, with a unique style on its own, plus he had worked with us in the past. I hit up Malev and soon he had his work ready as well, which totally completed the song. Will wrote each track with focus and consciously considered subject matter. The album has battle style punchlines and metaphors, lyrics about originality and copy-cats, a song about political corruption, one about his memories of growing up with Hip-Hop culture as a kid, a we have a song about supporting artists, one about the challenges one faces while making an album, and more. The album is for Hip-Hop artists, anyone who lives and has been living Hip-Hop-lifestyle, Hip-Hop fans and anyone who is fascinated, as we fall in all those categories.” 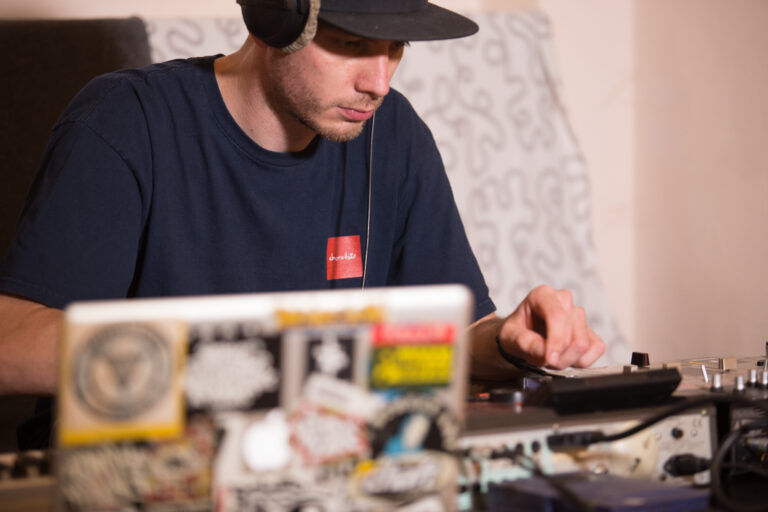 “By the time the music had been finished, I moved back home to The Netherlands after living in Greece for 4 years. I had been in touch with Rucksack Records back home in The Netherlands for an album release. The label is new, and he had not released a vocal album yet, but he was up for it. We made a deal to do vinyl and digital, plus a single on 45. With my longtime friend George Tzi (Ground Beef Records) from Thessaloniki, Greece, I decided to make a CD pressing as well, which made the total project a collaboration between me, Rucksack Records and Ground Beef Records. During my first year back in The Netherlands and the first year of the pandemic, we figured out the release of Certified Craftsmen, which dropped in February 2021.”

“Although Rucksack Records has sold out all the vinyl copies, we are pushing the album as our retail partners still have copies available. Also, we have our CD out, Ground Beef Records and other selling points will be glad to help out with that one. Currently I am based in my city Utrecht, The Netherlands again, contemplating my next move. I am not sure yet what the near future will bring, but I have a list of tracks to put to use. Thanks to Mind The Wax for inviting me to write this article.” 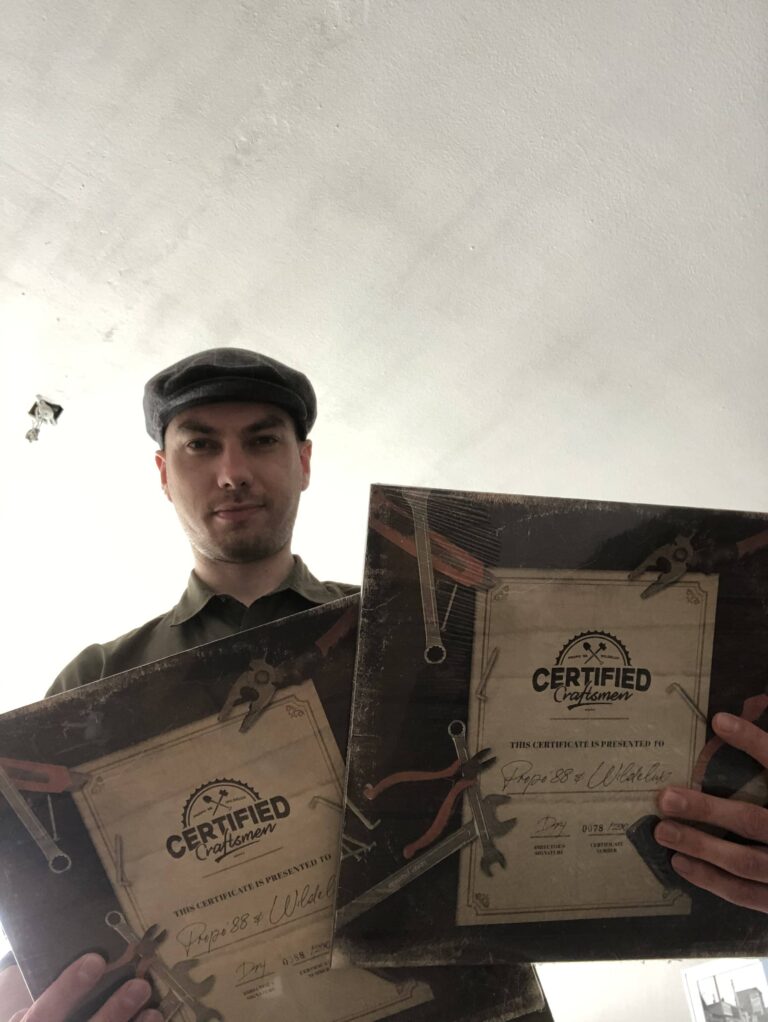 The “Certified Craftsmen” LP was pressed on 140gr black vinyl and on 200 limited and hand-numbered copies. It includes 14 tracks which are all mixed by Propo’88 and mastered by Ivo Statinski of Statisnki Mastering. The artwork was designed by the 3rdEyeRevolution. The vinyl release was done by Rucksack and the CD release via Ground Beef Records.

You can purchase the Certified Craftsmen album directly from their Bandcamp page certifiedcraftsmen.bandcamp.com or dig it in various indie record stores in Europe and Japan and off course on all digital platforms. 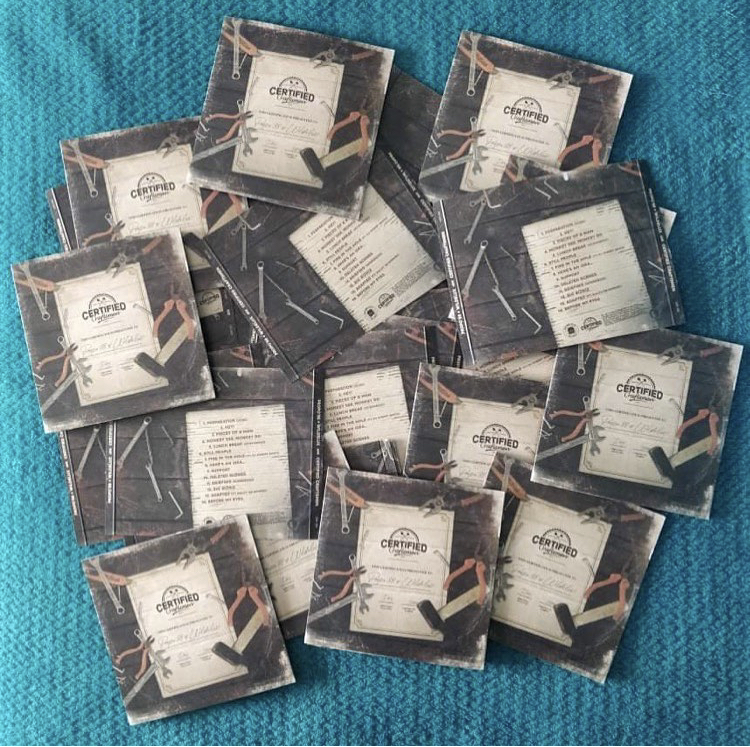 Do you want to know more about the two Certified Craftsmen, Propo’88 and Wildelux?

New #MeetOurClients blog article is up! This time